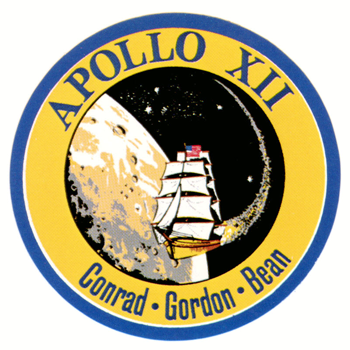 Apollo 12 was the second mission to land human beings on the surface of the Moon. The first mission to do so was Apollo 11 which took place a few months earlier in July 1969.

The astronauts on board Apollo 12 were Charles Conrad who was Mission Commander, Richard Gordon, the pilot of the Command Module, and Alan L. Bean who piloted the Lunar Module. When they were close enough to the Moon and in Lunar orbit, Conrad and Bean descended to the Moon's surface in the Lunar Module to explore it, while Richard Gordon remained in the Command Module on his own.

As with all Apollo missions, the main parts that made up the spacecraft were given names. The part of the spacecraft in which the astronauts travelled to the Moon and back to Earth was the Command Module and was called Yankee Clipper. The Lunar Module, which was only large enough to carry two astronauts and was used to land on the Moon and take off from it, was called Intrepid.

Just like many people do when they go on a trip somewhere, the Apollo 12 astronauts took a video camera with them to film their adventure. Whereas Apollo 11 was filmed in black and white, and was a bit grainy and blurry, the Apollo 12 astronauts had a state-of-the-art colour camera with them. Unfortunately, when Alan Bean was setting up the camera shortly after landing, he accidentally pointed it at the Sun. This destroyed the video camera tube, therefore preventing the rest of the mission on the Moon from being filmed.

Apollo 12 landed in an area called Mare Cognitum in the Ocean of Storms. Mare Congitum means Known Sea and was so called because several unmanned spacecrafts had recently landed in the area so it was a relatively familiar location. Although the actual landing site wasn't given an official name, Pete Conrad nicknamed his target landing area "Pete's Parking Lot". The Lunar Module landed only about 175 metres (580 feet) short of Pete's Parking Lot.

The Apollo 12 mission was the only mission to the Moon in which the astronauts were able to visit another spacecraft. The landing was so precise that Conrad and Bean were able to walk to Surveyor 3, a spacecraft which landed there in 1967, and took parts of it to return to Earth.

Alan Bean smuggled a camera timer onboard that he wanted to use to take a picture of him and Pete Conrad standing by Surveyor 3. Unfortunately, he was unable to find the timer when on the Moon so wasn't able to take the photograph.

The Apollo 12 Command Module returned to Earth on November 24th 1969 at 20:58:24 UTC (3.58pm at launch site). On landing, Alan Bean was knocked unconscious by a camera falling onto his head.

Pete Conrad's first words when stepping onto the surface of the Moon were "Whoopie! Man, that may have been a small one for Neil, but that's a long one for me." He said these words as a $500 bet with a reporter, who had asked if Neil Armstrong's "One small step for man, one giant leap for mankind" words were written for him by NASA. Despite proving the reporter wrong, he didn't collect his money.