Ten Facts about Mondays in Music 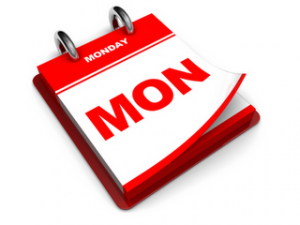 Ten Facts about Mondays in Music

Nobody likes Mondays. It's the first day back to work or school after the weekend. But it appears that Monday is a common theme in music. Here are ten facts about Mondays in music.

“Monday, Monday” was a hit for The Mamas and the Papas in 1966. It was their only number 1 in the United States, where it topped the charts for two weeks. It reached number 3 in the UK.

“I Don't Like Mondays” is a song written by Bob Geldof and performed by The Boomtown Rats. It stayed at number 1 in the UK for four weeks in 1979. Geldof was inspired to write the song after learning that a US woman went on a shooting rampage because she didn't like Mondays.

The Carpenters didn't like Mondays either, or the rain, and sang about how “Rainy Days and Mondays” got them down in 1971. It reached number 2 in America. It's highest position in the UK was number 63 in 1993.

The Bangles thought that Mondays were manic, and sang about it. Their song “Manic Monday” was released in 1986. It reached number 2 in the US, UK and Germany.

“Manic Monday" was actually written by Prince in 1984 before being offered to The Bangles. Ironically, the song that prevented “Manic Monday” from reaching number 1 in the United States was “Kiss” - by Prince!

“Blue Monday” is a song released by New Order in 1983, with rereleased remixes in 1988 and 1995. It is a track that makes use of a synthesiser and is fantastic example of eighties electronic music.

The Happy Mondays were a popular band from Manchester, England. They formed in 1980 but are more known for being part of the “Madchester” acid house scene from the late 1980s and early 1990s. A couple of band members have since made appearances in British reality television shows. Bez starred in and won Celebrity Big Brother in 2005 whereas Shaun Ryder finished runner up in I'm a Celebrity... Get Me Out of Here! in 2010.

Monday is the second word in lyrics to the theme tune to the television programme Happy Days.

Craig David's “7 Days” is a song about his antics with a young lady during one eventful week. It it, he describes what he got up to each day. According to Mr David, he “met this girl on Monday”. He spent the rest of the week getting to know her better.