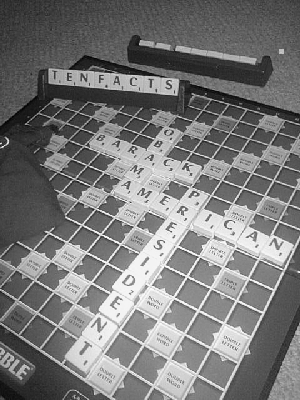 Here are ten facts about the 44th President of the United States, Barack Obama!

Barack Hussein Obama was born on August 4th 1961 in Honolulu, Hawaii, two years after Hawaii became the 50th - and most recent - of the United States.

Barack Obama was the 44th President of the United States of America, and the country's first black President. His predecessor was George W. Bush, and his successor is Donald Trump.

Barack Obama's mother was a white American from Kansas. His dad was from Kenya in Africa. His parents separated at the age of two, and Barack moved to Indonesia with his mother and stepfather. He returned to Hawaii at the age of ten to live with his grandparents.

Barack Obama once worked in a Baskin Robbins in Honolulu, Hawaii. He doesn't like ice cream.

Barack Obama's nickname as a child was Barry.

In 2008, Barack Obama spent $3 million for a 30 minute television advert to promote his Presidential campaign. The advert was shown simultaneously on CBS, NBC and Fox at 8pm on 29th October 2008. Although this may seem a lot of money for a TV advert, it is estimated that just 30 seconds of advertising during the Superbowl would cost $3 million. Looks like Mr Obama got quite a bargain for his half hour promotion!

Barack Obama used to smoke but managed to quit the habit in 2011. It probably helped that the White House has a smoking ban, brought in by Hilary Clinton when her husband was President.

It's not just the Presidency that he's won (twice). Barack Obama is also a Grammy Award winning artist. In 1995, he published his memoir Dreams from My Father: A Story of Race and Inheritance. He recorded an audio version of the book in 2006 and won the Grammy Award in the year for Best Spoken Word Album. In 2008, he won another Grammy for Best Spoken Word Album for The Audacity of Hope: Thoughts on Reclaiming the American Dream. The book version of that topped the New York Times nonfiction bestseller list for several months at the end of 2006 and beginning of 2007. Not to be left out, his wife Michelle Obama topped the New York Times Best Seller List in December 2018 with her book Becoming. Link here