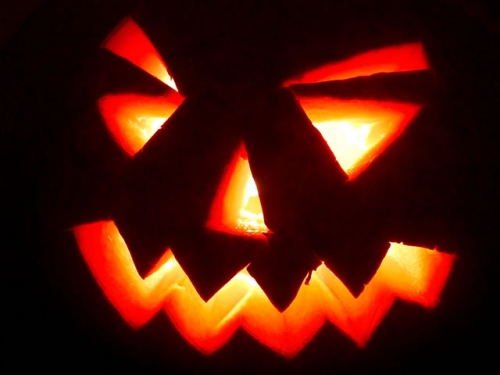 Big Melons! That was how pumpkins were once described when they were noticed growing in North America. Here are are ten facts about everybody's favourite Halloween foodstuff.

The holder of the world record for the largest pumpkin ever grown is Mathias Willemijns of Belgium. His huge pumpkin weighed in at 2.624.6 pounds (1,190.50 kilograms) at the European Championship of Giant Pumpkins in 2016. The second largest pumpkin was grown by Steve Geddes of New Hampshire, USA. He grew a 2,528 pound (1,147 kg) pumpkin in 2018. Interested in growing giant pumpkins? Why not visit the Giant Pumpkin Commonwealth to find out the rules and how to enter.

Large pumpkins aren't actually that tasty. If you want a pumpkin full of flavour, go for a smaller one! So, although people like Mr Willemijns and Mr Geddes enjoy growing large pumpkins, they probably don't get as much pleasure out of eating them.

Pumpkins can be grown in every continent in the world apart from Antarctica. Evidence of pumpkin seeds about 7000 to 9000 years old have been found in Mexico, but it is believed that pumpkins originated from North America, which is by far the biggest pumpkin-growing country in the world. Morton, Illinois is the largest producer of these North American pumpkins. 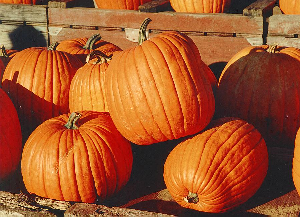 Years ago, people believed that pumpkins could cure freckles and snakebites. Quite why you'd want to cure freckles is anybody's guess. But, should you want to, you can cure them by mixing ten pounds of pumpkin with two spoonfuls of honey and a small amount of salt. Rub it on your face, and your freckles are gone! Well, they're probably still there - it's just that your face is covered with orange pumpkin mush that you can't see them. A similar method cures snakebites. Or, you could just prevent snakebites by throwing the pumpkin at the snake before it has chance to bite you?

Pumpkins are low in salt and contain no cholesterol. Well, not unless you're using them as a freckle cure then you have to add salt.

The act of carving out pumpkins and using them as lanterns, or Jack-o-lanterns, dates back to old Gaelic times. Many centuries ago, on October 31st, Samhain was a festival held in Celtic regions of what is now Ireland and the United Kingdom (e.g. parts of Wales, Scotland, Cornwall, the Isle of Man). It is a precursor to what we now know as Halloween. It was celebrated as a way to mark the end of the summer harvest season and the start of winter. The Irish used to carve out turnips into frightening faces. They would light a candle or put a smouldering coal into their "turnip head" and place them outside their houses to scare away evil spirits, or to welcome their lost loved ones to their house for the Samhain festival. The tradition continued when Irish immigrants settled in North America, using the common pumpkin as an alternative to turnips.

Why are pumpkins called pumpkins? In 1584, French explorer Jacques Cartier reported seeing "gros melons" (big melons) in St. Lawrence, North America. These big melons were named "pompions", a French translation of the Greek word "pepons" (which means big melons) and then translated into English as "pumpkins."

Pumpkins are an extremely versatile fruit and can be used for a variety of different meals. They can be used to make soup, pies and bread. Pumpkins were once used as an ingredient of pie crust, rather than a filling. The flower of a pumpkin is edible, as are pumpkin seeds which can be eaten as a snack when roasted. Because of the nutrients contained in pumpkins (as well as being low in salt an cholesterol, they also contain potassium and Vitamin A and are 90% water) they are processed and used as animal food.

In popular fiction, pumpkins are often connected to the supernatural. Witches apparently turn people into pumpkins. In Cinderella, a giant pumpkin is turned into a coach by the Fairy Godmother, and later turns back into a pumpkin after midnight, and in the Harry Potter novels, Harry and his friends seem to have a penchant for pumpkin juice.