Ten Facts about The Great Wall of China 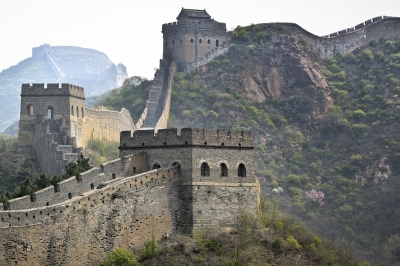 Ten Facts about The Great Wall of China

Walls aren't very exciting things. They just stand there and get in the way. Of course, this is the exact reason why some walls are built. The Great Wall of China is one such wall. But unlike other walls, it's quite exciting too. Over 2000 years old and thousands of miles long, it is visited by millions of people each year. So great it is that it deserves its very own page of facts. Here they are!

The Great Wall of China was originally a series of separate walls built in different regions of the country. Over 2,500 years ago, China was split into rival states. The first walls begun to be built from around 476 BC. They were built to protect the warring states of China from each other and were originally made from packed earth and mud.

In about 221 BC, Emperor Qin Shihuang of the Qin Dynasty had conquered each of the rival Chinese states and unified the country as one. He ordered that a wall would be built to protect China from invasion from tribes from the north. This would be done by joining existing walls and strengthening them, demolishing any walls that were no longer needed.

The Great Wall of China continued to be rebuilt, updated, modernised, extended and reinforced up until the 17th Century, mostly with the intention to protect China and prevent foreign invasion, but also as a kind of border point to control immigration into and emigration out of the country. The was mostly during the era of the Ming Dynasty, between 1368 and 1644, and most of the wall present today is from that period.

The Great Wall of China is estimated to be about 8,850 kilometres long (5,500 miles), running from east to west of northern China. However, this measurement includes parts of the wall that aren't actually physical wall, but served the same purpose - things like trenches, rivers and lakes. It also includes parts of the wall where it splits off into branches. As the wall has aged, parts of it have collapsed, been demolished or stolen, while other parts have eroded naturally and are lost to nature. Recent archeological studies have managed to discover previously unknown parts of the wall and suggest that the wall is actually 21,196 kilometres long, or 13,170 miles!

Contrary to some beliefs, the Great Wall of China cannot be seen from the moon. Even from low Earth orbit, for example from the International Space Station or a Space Shuttle, the wall is barely visible. Although it is very long, it is just too narrow to be seen.

The Great Wall of China is most definitely the longest wall in the world and it received its name when Europeans first saw it and were mightily impressed by it. The Chinese however, just saw it as being a rather long wall and know it simply as the Long Wall (Changcheng). Sometimes they will call it the Ten Thousand Li Long Wall (Wanli Changcheng). Wan means Ten Thousand (or great number), Li is a unit of measurement equal to about half a kilometre, Chang means Long and Cheng means Wall. It is written as 萬里長城. 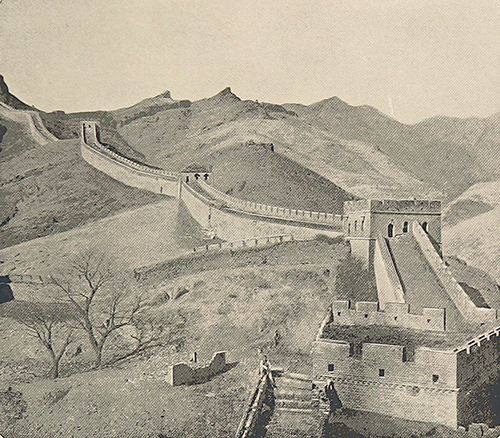 In 1899, four newspapers in Denver published the news that the Great Wall of China was to be demolished to make way for roads. The story was a hoax concocted by reporters of each of the newspapers following a meeting in a hotel. The news spread across America and around the world. The hoax was finally confirmed when the last surviving editor revealed the truth in 1909.

It is illegal to remove bricks from the Great Wall of China. It is also illegal to make carvings into the wall, or grow trees or build things on it. However, the Great Wall of China hasn't always been looked after. Throughout its history, especially during times when it wasn't really doing much, people have removed bricks from the wall and used them in other building works. They were even encouraged to do so as recently as in the 1950s. Nowadays, as  it is seen as culturally and historically significant (and a great tourist attraction!), some of the bricks have been returned as part of projects to restore it.

The Great Wall of China has been visited by many world leaders. The first US President to pay it a visit was Richard Nixon in 1972. He appeared to like what he saw and said "I think you would have to conclude that this is a great wall." Queen Elizabeth II is the only British monarch to have ever visited The Great Wall of China.